Language is our primary source of communication. It’s the method through which we share our ideas and thoughts with others. Language today is the most powerful tool we have for reaching out to others. We can use it to express our feelings, to spread our ideas, and even to establish peace.

Are you ready to agree to a small quiz?

If you randomly ask somebody two questions “How many countries are there in the world?” and “How many languages are spoken today?”

Or wait a minute! If we ask you these questions?

It is time to check the correct answers:

*dependencies (or dependent territories, dependent areas), Areas of Special Sovereignty (autonomous territories), and other countries recognized by the United Nations as not being self-governing are not included in total number.

How close were you?

Read about Is Language a Tool to Reach Out the World?

Why does the number of spoken languages change so quickly?

The number of languages is constantly in flux because linguists are learning more and more about the world’s languages every day. And beyond that, the languages themselves are in flux. They’re living and dynamic, spoken by communities whose lives are influenced by our rapidly changing world. The time we are living today is pretty fragile: approximately a third of languages are now endangered, often with less than 1,000 speakers remaining. Meanwhile, just 23 languages account for more than half the world’s population.

Language today: what are the most spread and spoken languages?

The top ten languages and the number of their native speakers are as follows, according to the Ethnologue statistics: 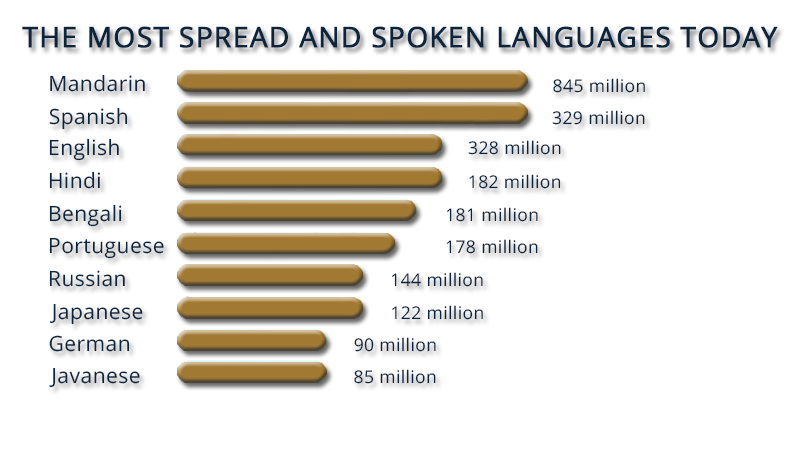 Where do the languages take their origin?

Researchers are still baffled as to how and when these numerous languages were invented. There are multiple theories about the origin of the languages. While there are only a few references mentioned in the Holy Bible and other religious texts, the origin of languages still remains a mystery.

One such reference as to the origin of languages comes from the Book of Genesis in the Holy Bible. According to the story, after the Great Flood, there were many people who united and decided that they wanted to see God.  At that moment they were speaking one common language. So they agreed to build a city and tower of such height so it could reach the sky and the Lord. God didn’t like that idea so He blended their speech so that they could no longer understand each other. That was the reason why the human race starts to populate new territories around the world.

Why are the languages dying?

A key factor is in education. When a language ceases to be taught to young children, its rate of survival is very bleak. It can then be predicted with near certainty that it will not survive the death of the present native speakers. Based on current circumstances, linguists are now able to estimate that at least 3,000 languages will be lost within the next century. That’s almost half of today’s known languages!

Language today and me

Today a question of knowing several languages has lost its topicality simply because it turned into must-have. An average person in our society today speaks about 3 languages.

There are many factors that influence people to be able to communicate several languages:

A person needs to learn the language today in order to get in touch on an international level. Speaking it will help to communicate with people from countries all over the world.

This is the reason that has driven some languages to obtain a status of the international language. Students from different countries need to speak at least one common language to understand each other in class.

The Internet and Press

Since the Internet came into easy access, people got a chance to get connected to each other and communicate. Again we have come to the point that knowing languages is all about communication. When you open a web page, you see that you are offered a multiple choice of languages for you to be comfortable and confident in understanding.

Linguistic skills will also help you in any business venture you choose to follow. If you visit some offices, companies, governmental organizations, or even math or engineering companies, you will see the importance of knowing languages. Any big company will hire their professional staff after getting to know whether the people they are hiring are good at speaking a foreign language or not. Companies who want to function at an international level only consider their staff well educated if they are good English speakers, writers, and readers.

Hope we were able to show you the general picture of what language today is, when did it take its origin, what is the overall picture of languages spoken today in the world. Moreover, we hope that we were able to demonstrate what languages mean today and how important it is to learn at least one or two foreign languages. How successful you are at learning to speak a language depends not only on your strategy but on the amount of enjoyment and engagement you have with your language resources.

Read about our Language Translation Services

Humour in Translation, Which Makes It

Humour is an important aspect in day to day communications. Humour plays a major role in films, literary works, and general art. When you deep dive and take a look at humour, you will notice that the roots of it are located within a specific linguistic and cultural context. Text can be made interesting with the proper usage of humour. On the other hand, humour can contribute a lot towards making text engaging as well.

END_OF_DOCUMENT_TOKEN_TO_BE_REPLACED

While working as a translator, it is important for you to have a strong understanding of translation quality standards. Then you will be able to ensure that the level of translations that you do is high. In other words, it can help you to become an effective translator and move forward with translation activities.

END_OF_DOCUMENT_TOKEN_TO_BE_REPLACED

What is Example-Based Machine Translation?

END_OF_DOCUMENT_TOKEN_TO_BE_REPLACED

Top Languages to Learn in 2020

Are you looking forward to spending your time and effort to learn a new language? Then you should have a clear understanding of the top languages that you should be learning. Along with that, it is possible to make sure that you get the maximum returns out of time and effort that is being spent on the job at the end of the day.

END_OF_DOCUMENT_TOKEN_TO_BE_REPLACED

The Easiest Languages to Learn

Do you want to learn a new language? Then it is worthy to take a look at the list of easiest languages to learn as well. Once you do it, you will be provided with the opportunity to learn the new language without spending too much of time and effort. This can deliver a bunch of excellent experiences to you as well.

END_OF_DOCUMENT_TOKEN_TO_BE_REPLACED

Most Used Languages in 2020

END_OF_DOCUMENT_TOKEN_TO_BE_REPLACED

What Makes a Good Medical Translation?

Medical translations are mission-critical. That’s because it is extremely important to make sure that consistency is met during the translation process at all times. If this doesn’t take place, it is possible to end up with numerous negative consequences. It can even result in loss of life.

END_OF_DOCUMENT_TOKEN_TO_BE_REPLACED

Get The Best Translation Price